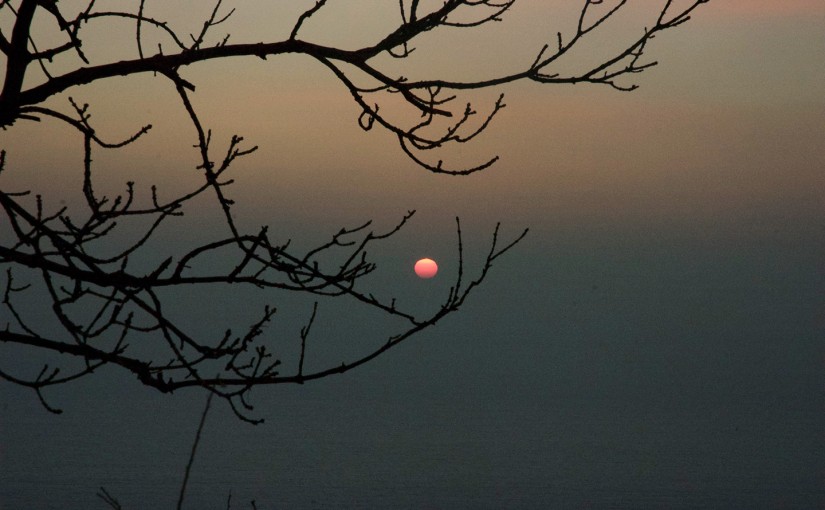 This morning I found myself on a rocky, weather-beaten mountain side. The top was obscured by darkness and a thick cloud, but a rain soaked south westerly wind drove us steadily onwards. We joked as we trudged up the muddy boggy path to begin, but as the ascent transformed into hard jutting rocks, our journey became more silent and inward focused.

I had invited two old-time friends to join me for a ritual I do sometimes. On the surface it is a celebration of the Winter Solstice, where we rise early to go see the mid-winter sunrise marking the shortest day of the year. I prefer not to get too caught up in what the date is supposed to represent, but instead use it as an excuse to kindle a bit of wonder.

My first introduction to this ritual was 8 years ago, when I responded to an invitation from my aunt to join her and some of her yoga buddies to go see the Solstice sunrise. We met on a local hill that overlooked the sea to the east. I generally did not get up that early, especially in the middle of winter, unless it was absolutely necessary. But this time, things were different. It felt like answering the call to adventure. The uncomfortable act of rising in the cold pre-dawn darkness to go climb a hill belied a certain magic. In fact, it felt like breaking one spell by creating another.

It was bloody cold that morning and my hands ached when they peeped out of my sleeves to snatch a few stealthy photos. It was also exhilarating in its simplicity. There was no show, no planned festivities, no added decorations. Just a cold, crisp morning with the sun coming up like it does everyday. There was a feeling of anticipation, but the only expectation was to just turn up. Nothing else was necessary. The very fact that this activity was not necessary gave it more significance in my mind. It was a personal choice.

While everybody else seemed to be caught up in the bustle of Christmas, with all its trappings of festive cheer, excess and indulgence, a small few would gather to celebrate something entirely different. At a time of heightened commercial and religious influence, this simple act felt downright subversive. That brought a smile to my face.

It’s easy to feel strong-armed into behaving a certain way at this time of year. We have to do Christmas. Whether it’s getting caught up in the commercial frenzy or the family affairs and social buzz, the intensity can be overwhelming and leave us feeling drained. The prevailing cultural winds are strong at this time of year and its easy to get blown around by them. There are many rituals we end up doing, that we get roped into, not so much of our own choosing, but because that is what you do at this time. The origins of many of the things we do are obscured. I know there is a magic about this time of year, but sometimes it’s hard to recognise in all the clamour.

That is why I find the idea of having our own personal ritual at this time so compelling. I’ve put very few constraints on this activity, preferring to let the meaning evolve naturally over the years. From the beginning there has been an element of invitation and acceptance. The first year I accepted an invitation, the next few years I initiated the offer and was happy to have friends join me.

What appealed to me at first was the idea of celebrating something more universal than a cultural festival that has a lot of mixed up religious, commercial and social influences. The simplicity of visiting a sunrise holds appeal for everyone. It is direct access to an experience of wonder. The only necessity is to turn up.

Over the years I’ve chosen to mark the occasion by going up a mountain (or hill). Getting up early and climbing a hill in the dark and cold is not fun per se, but I’ve found the reward for doing so immense. An austere beauty is unmistakably present which acts like a tonic or palette cleanser to our over-stimulated souls. The first year I did this I was hit by a powerful surge of inspiration that has stayed with me ever since. I’ll save that story for another time, but suffice to say that it left me transformed.

Subsequent years I have spent it in a variety of ways. 2009, alone on a holy mountain in India. 2010, with friends in a blizzard back home. 2012, bathed in a majestic light with my heavily pregnant partner. This year, weather-beaten with friends on an obscured peak. 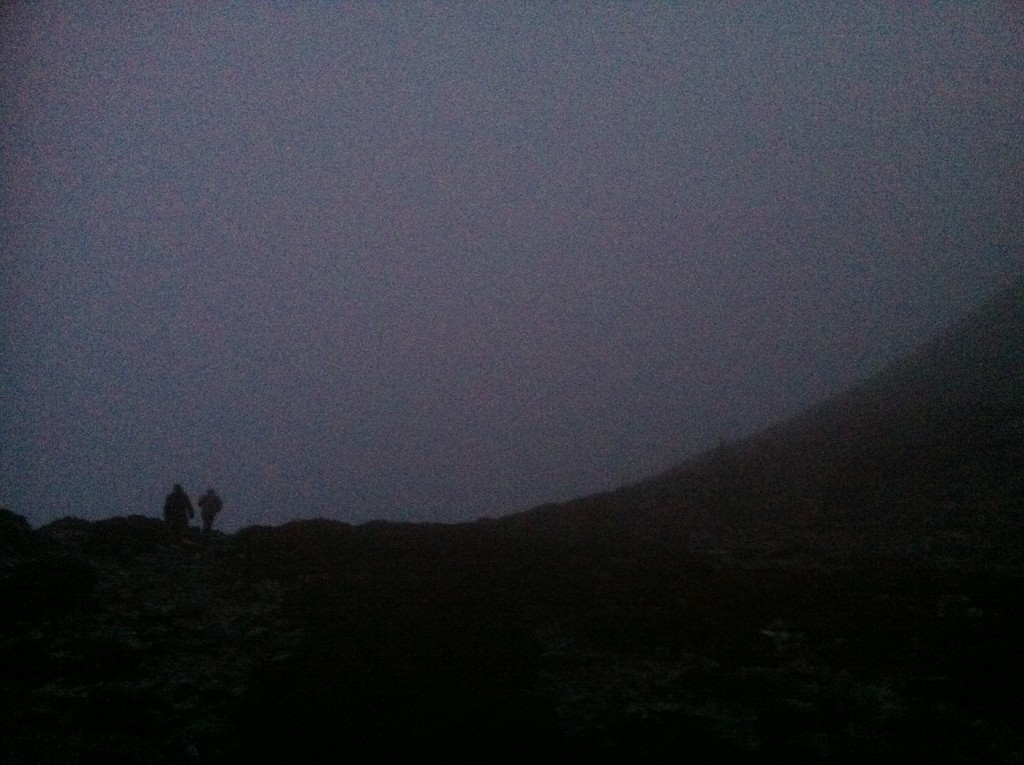 As we found this year, there is no guarantee of actually seeing the sun. Having no formal plan beyond just getting there, and not being able to see a thing when we did arrive, it further underscored the sense of receptivity needed to make the journey meaningful.

After a tough climb in very strong winds and a cold rain we reached the top out of breath and steaming. We were surprised to find a patch of relative calm, where we rested a while sheltered by an outcrop at the peak. As the weather howled on the far side of the rocks we found some respite to gather our wits and have some tea. Visibility was so poor that all we could see was an impenetrable shroud of misty greys. So much for the panoramic views punctuated by the rising Solstice sun. I laughed to myself thinking of a piece of Native American wisdom I came across recently, which said that mountains are for finding vision.

We couldn’t see what we came for, but this didn’t matter. Without the sun and vista to capture our attention, it was easier to consider why we had actually come. If we didn’t come to see, then perhaps we were here to listen and feel. The howling wind and our cold saturated clothes only emphasised a certain sense of irony and humour with our situation. We didn’t need to be here and yet here we were soaked and weather-beaten, but elated with a sense of latent purpose. With no awe inspiring view, and fairly uncomfortable physical sensations, the focus narrowed to simpler things. The more that was stripped away, the better it felt. Why would this feel so good? 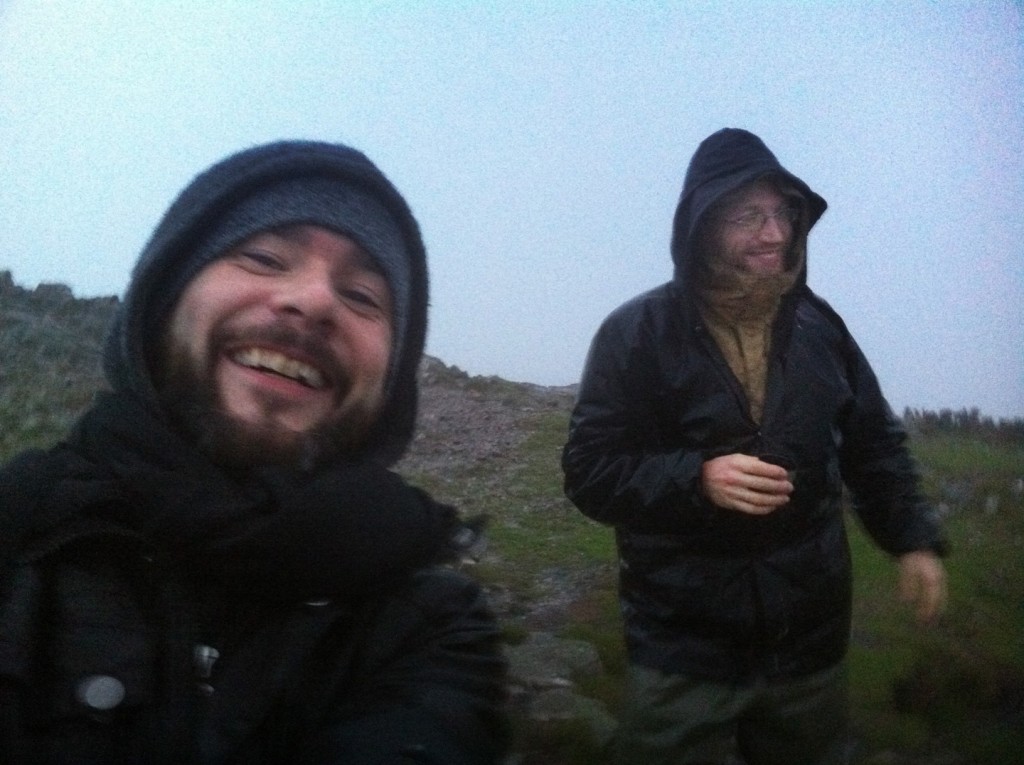 I wondered should we do some sort of ceremony to mark the occasion, but nothing came. We stayed for a few minutes and then headed back down again. The weather was even more punishing on the way down with stinging hail stones mixed with the rain. I held my arms up to my face to protect it and ended up running part of the way down. All I could see was a blur as my eyes were filled with water, both from the rain and tears from the cold.

As the path levelled out near the bottom I spoke with one friend about the little actions that make a big difference. Our recent conversations had explored the notion of creating time for those things we deem most important. I discussed my morning ritual and my buddy mentioned something he was doing with his girlfriend that they called their “5 minutes”. They would give each other 5 minutes of uninterrupted time to say their bit and be heard by the other. He said it had transformed their relationship and was one of those simple acts with huge impact.

Sometimes you just have to listen closely to find the treasure you’re looking for. I figured that was the one insight that I needed to hear that made this whole ordeal worthwhile. It reminded me that we can imbue our experience with greater meaning, elevating it from mundane to sacred, simply by creating time to be present and attentive.

The invitation is to take just a few moments out of your regular pattern to try something different. Then listen closely to see what transpires.