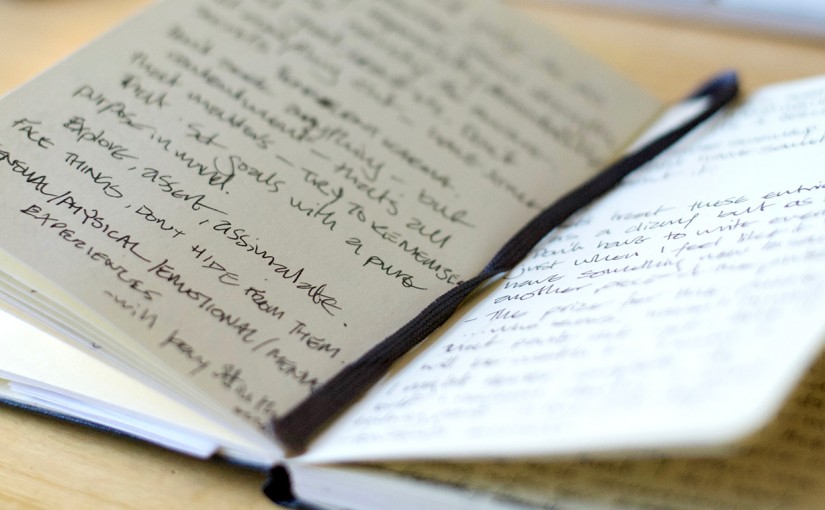 In my last post I introduced the idea of asking an opening question (“Where do I start?”) to get things going. It’s a useful device for tackling blank canvas syndrome and initiating something that you’re struggling to get moving.

Sometimes, a response comes pretty quickly in the form of a statement. For instance, in the case of this very piece, the phrase “Start as you mean to go on”, came out of nowhere and plonked itself firmly on the page. I had vaguely intended to write about something else, but staying true to my process I decided to follow this line of enquiry instead.

What does that phrase really mean anyway, and how does it apply to my situation? I tracked it to the quote —

“Begin as you mean to go on, and go on as you began, and let the Lord be all in all to you”

— Charles Haddon Spurgeon, All of Grace

A person on Answers.com offers the interpretation:

“It means that you should start doing something in the way you intend to keep doing it. That is to say, your long-term idea of how you proceed should be the basis of your short-term method.”

That is very helpful in providing clarity for the purpose of this blog. I wasn’t entirely sure at first. All I knew was that I had to bite the bullet and finally publish something in the wild.

I started this blog with the intention of reviving something that I had started a long time ago. Somewhere along the way I got lost. I tried to abandon something that felt profoundly inspiring at one stage but then became a complex mixture of self-doubt, agonising delusion, drudgery and loss of connection. But it is something I have been haunted by ever since. A vision so strong and interconnected that it has seared a deep impression on me.

But before I go into any of that, I want to return to the very beginning of my journey with writing, and go on as I began.

14 years ago I followed an intuition to pick up a pen and try out some free form exploration with words. It began as a means of getting my thoughts straight and teasing out some ideas that were too big to hold in mind all at once.

The very first thing I wrote to myself was the statement,

“You can only accurately talk about a subject with any knowledge if you:

a) Do the task/study/day-to-day thing. Actively experience stimulus from the subject — Routine.

b) Do extensive research on the subject, i.e. “do your homework”

c) Have a personal interest in the subject that gradually improves with time & experience.

d) Combination of the above.

That opening page broke ground and lay the foundation for what would follow. Implicit was a desire to be able to speak about something with a measure of authenticity and insight. It also highlighted what I felt I was missing.

I was 20 then. Naïve, eager, confused. Feeling mute and powerless I equated knowledge with power and figured that was what I needed to feel better about myself.

My dilemma, as I saw it, was that I had an interest in so many topics that I could only have a little knowledge or experience in each. There was just too much to take in. I couldn’t possibly follow them all. Only after time could this knowledge that I so desired be built up, so my resolution would not be immediate. However, a seed had been planted that would slowly grow into something unexpected.

I started by posing questions to myself, interrogating my motives and values. I tried to dig out what was really driving me forward. What lay beneath these diverse interests? Through this process of enquiry I would clarify my goals, examining why I wanted things and what was preventing me from achieving them.

“What do I really want in this life? And how do I get it? Knowledge? Desire? Importance?”

Sometimes a statement would arrive that I would have to chew over for a while.

A phrase — “Just do the right thing”,  kept presenting itself from the back of my mind.

But by what rules? By what criteria is “right” measured? I looked at my assumptions and tried to see where they originated from. Were they parental? Cultural? Moral?

Something deep inside knew the right course of action, but it was mixed up with a lot of other competing voices. Writing provided a lens by which these inner voices could be recognised and filtered. By externalising them, I was given a measure of perspective and with that a sense of freedom and relief from the storms that were prone to kick up inside. As I settled into my notebooks I was able to tap into that voice that knew what the “right thing” meant. This brought with it a level of clarity and inspiration that felt very empowering.

My original purpose was one of exploration. The idea was to just let thoughts flow and see where they took me. As the notebooks stacked up, I continued unraveling the puzzle of the inner life and exploring the notion of finding the right thing to do. But crossing that threshold had other implications I wasn’t expecting.

As I’ve mentioned before, starting the process of writing was like letting a genie out of the bottle. A niggling voice that I could not identify or make out distinctly presented a challenge, and I accepted. This unlocked something that I am still reeling to understand. A binding contract was formed that I was oblivious to at the time, but it is one I feel I must honour now.

It feels right to write, although there is a persistent resistance that I seem to do daily battle with. This adversary has kept me from releasing any writing over the years. It attacks with terms like “You’re not good enough”, and “nobody cares what you have to say”. A fog of confusion descends, but this has the unusual effect of strengthening my resolve to write, just to break through the uncertainty.

I write everyday now, in the wee hours of dawn while nobody is watching. It’s how I start my day and has become a sacred activity that keeps unearthing curiosities that fuel the desire to go on. From all the doubt and uncertainty over the years I’ve developed certain techniques to push through and find a deeper sense of meaning through creative enquiry.

Crafting meaning through a process of wonder and exploration, writing provides the basis for profound personal transformation and an examined life worth living.

Join me in the next instalment as we go deeper into this process of creative discovery.